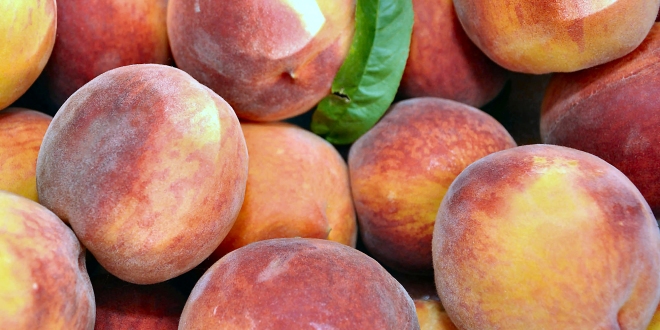 Peaches (Prunus persica) share the sub-genus Amygdalus with almonds. They both belong to the genus Prunus, which also includes plums, apricots, cherries, and nectarines. These fruits are in the Rosaceae family, along with strawberries, blackberries, raspberries, quinces, apples, pears, and ornamental trees and shrubs (such as roses, meadowsweets, photinias, firethorns, rowans, and hawthorns).

Peaches originated in China around 2000 BC, where the first wild peach trees produced small, sour fruits. The ancient Chinese learned to cultivate the trees, resulting in larger, more flavorful fruit. Peaches were mentioned in Chinese writings as far back as the 10th century BC. They were a valuable trade commodity and were also believed to confer immortality, so they were a favored fruit of emperors.

Carried west by caravans, peaches slowly spread along trade routes throughout Asia. They arrived in India and western Asia in ancient times. Peaches likely reached the Middle East by way of the Silk Road, a 2,500-mile trade route that stretched from East Asia to ancient Persia (present-day Iran). In Persia, the climate provided excellent growing conditions for peaches.

By 140 BC, peaches had reached Greece. In 65 BC, the Roman emperor Pompey introduced peach trees to Roman orchards. Because the peaches had come to them from Persia, the Romans called peaches “Persian apples” (persicum malum), which led to their scientific name, Prunus persica.

Pliny the Elder described several peach varieties that had been grown by 23 AD. Peach trees are portrayed on the walls of the towns destroyed by the Vesuvius eruption of 79 AD. Peach stones, like apple and pear seeds, made their way across Europe along with Roman legions. When peaches finally reached northern Europe, they were enjoyed as a rare delicacy as the climate did not encourage peach farming. In Middle English, the Latin persicum malum it melded into peche, much closer to what we call it today.

In 1513, Spanish explorers introduced peaches to Florida. In 1524, the Spanish introduced peaches to Guatemala, from which peach farming spread north through Mexico and eventually, into California. Peaches may also have come to North America in 1562 with French explorers who established settlements in the area of present-day Mobile, Alabama. Peaches also arrived in 1565 with the Spanish colonists who settled in St. Augustine, Florida. Peach trees from these peach stones quickly naturalized into groves so widespread that later colonists believed that peaches were a native American fruit. Franciscan monks introduced them to St. Simons and Cumberland islands along Georgia’s coast in 1571.

Peaches were noted by John Smith in Jamestown as early as 1629. By 1633, George Minifie had peaches growing at his estate at Buckland on the James River between Blunt Point and Jamestown in Virginia. Peach growing began in New Jersey in the early 17th century when colonists began importing European varieties. The early settlers learned that peaches thrived better in the coastal areas of the continent than in Europe. Peaches were also cultivated in Delaware and Maryland in the 17th century. By 1683, peaches were available in New York by the wagon-loads from New Jersey orchards. By the late 17th century, peaches were growing in South Carolina. During that time, Spanish missionaries from Mexico began to build the California missions as they traveled north along the coast. In addition to Christianity, they also brought peaches, which they planted in their gardens. However, mission cultivation did not supply the general population. Most peaches were shipped into California from the eastern states.

By the beginning of the 18th century, peach trees had naturalized so abundantly throughout the southeastern and mid-Atlantic colonies that they grew as luxuriantly as weeds. By the mid-18th century, peaches and plums were cultivated by American Indians. They helped the trees spread across North America by taking seeds with them as they migrated. George Washington noted two varieties of peaches in his Mount Vernon orchard. Thomas Jefferson cultivated over 38 varieties of peaches in his South Orchard alone.

American farmers did not begin commercial production of peaches until the 19th century. In 1849, the gold rush initiated a population boom in California. As a result, shipments of peaches from the east could no longer satisfy demand for peaches. California peach production began, and peaches flourished in California’s Mediterranean-like climate. Raphael Moses, a planter and Confederate officer from Columbus, was among the first to market peaches within Georgia in 1851. His method of shipping peaches in champagne baskets, rather than in pulverized charcoal, helped to preserve the flavor of the fruit and contributed to his success. The first Georgia peaches were shipped to the New York market in 1858. They were transported by wagon to Augusta, then by shallow-draft boat to Savannah, and finally by steamship to New York. Henry William Ravenel of Aiken shipped South Carolina’s first reported commercial shipment in 1859, and Colonel R.B. Watson, South Carolina’s first Commissioner of Agriculture, was the first commercial peach producer to ship peaches out of the state in 1870s.

Samuel Rumph, a middle Georgia peach grower during the early 1900’s, revolutionized the peach industry with a new variety which he named after his wife Elberta.  This yellow-fleshed peach was of superior quality and shipped better than previous varieties. Elberta remained the leading peach in Georgia until the 1960’s but newer varieties have since replaced the Elberta in commercial use.

Today, peaches are the second largest commercial fruit crop in the States, second only to apples. Although the southern states lead in commercial production of peaches, they are also grown in California, Michigan, and Colorado. Italy, China and Greece are major producers of peaches outside of the United States.

You may find fresh peaches from April through October, but they will be at their very best from June until the end of August. Cooler climates may produce local harvests in July and August and into September. Peach trees flower fairly early in the spring and the flowers are easily damaged or killed by temperatures below about 28° F (−4° C). So you won’t find local peaches in places where temperatures dip below freezing well into spring.

Buy organic. Peaches are among the produce that normally rank highest in contaminants. For a full list, check out the Environmental Working Group’s Dirty Dozen. Supermarkets are steadily increasing their organic offerings, and the spread of farmers markets around the U.S. has added to the availability of organic produce.

Peaches can truly ripen, not just soften and rot, after they’ve been picked, so you can buy mature peaches and finish ripening them at home. Ripe yellow-fleshed peaches should have a golden hue behind their reddish blush, which is not a sign of ripeness, but just of where the sun shone on the peach. This coloration is easiest to see that the stem end, since little sun hits the peach there and they don’t tend to develop any blush. Lighter yellow color means a less-ripe peach. Avoid peaches with a green tinge, bruises, scratches, flat areas, or wrinkly skin.

Peaches should smell like what you want them to taste like. No smell usually means an under-ripe peach. Like any fruit, peaches should feel heavy for their size. Hold the peach in the palm of your hand and gently squeeze with your whole fingers to gauge how hard or soft the peach is. Avoid baseball-hard peaches: they were picked before being ready and most likely will never ripen properly. Tennis ball-like peaches are not ready to eat, but you can take them home for ripening to eat later in the week. Soft peaches will bruise slightly when you squeeze. These are ready to eat right now.

Mealy peaches are almost always the result of peaches being picked either very green or very ripe and then chilled, then brought to room temperature. Avoid any vendor that sells you a mealy peach.

Mature peaches (those that aren’t hard or green) will continue to ripen after they are picked. Set them stem-side down not touching one another. If your peaches are perfectly ripe but you aren’t quite ready to eat them, store them in the refridgerator. The cold will radically slow down their ripening. Check chilled peaches frequently, because the cold air in the refrigerator is dehydrating, so eat them before their skin wrinkles, which is a sign of both drying and over-ripening.

If your peaches need a bit more ripening, keep them on the kitchen counter. Put peaches that are still quite firm in a paper bag – it will capture the ethylene gas they give off and speed ripening. You can add a banana – the riper the better – or an apple or pear to the bag. These fruits give off even more ethylene than peaches and will hasten the ripening of the peaches. If you keep peaches on the counter or used the paper bag method, check them frequently. When any peach is ripe, be sure to eat it or move it to the fridge until you’re ready to eat it so it doesn’t go from ripe to rotten. In all cases, peaches need to breathe, so paper bags or no bags are your best bet. Just remember, the paper bag will hasten their ripening unless you put it in the fridge.

If you can’t eat all the peaches at hand quickly enough, you can freeze them. Frozen peaches are delicious in baked goods, smoothies, and ice cream. Prepare the peaches for freezing by peeling and slicing them. Lay the peeled peach slices in a single layer on a baking sheet. If you want to minimize clean-up, go ahead and line the baking sheet with parchment paper or wax paper first. Set the baking sheet in a freezer until peaches are frozen through, at least four hours and up to overnight. Transfer the frozen peach slices to a resealable container, seal (pushing out as much air as possible), and return the peaches to the freezer until you’re ready to use them. Frozen peaches will keep up to 6 months in a refrigerator-freezer combo and up to 12 months in a stand-alone freezer.

Try peaches in some of the following recipes: