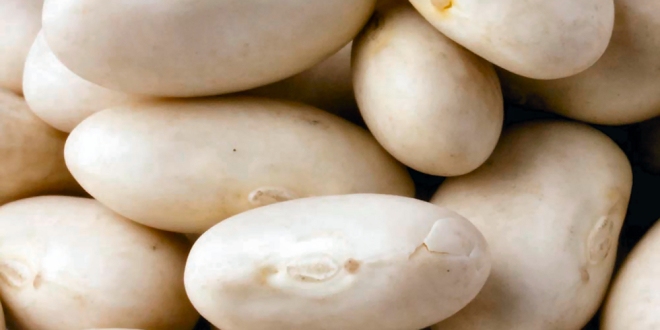 Great Northern beans and all 200 varieties of P. vulgaris originated in the tropical southern part of Mexico, Guatemala, Honduras, and part of Costa Rica, where they were cultivated as early as 8,000 years ago.  They spread from this center of origin to North and South America.

European explorers, including Christopher Columbus, found the climbing beans typically planted alongside corn. In Columbus’s diary from November 4, 1492, he describes lands in Cuba planted with faxones and fabas “different than ours.” Later he encountered fexoes and habas that were different than the ones he knew from Spain. Faxones and fexoes were probably cow peas and fabas and habas were fava beans. The beans Columbus found were common beans, Phaseolus vulgaris. When Christopher Columbus returned from his second voyage to the New World in 1493, he brought the common beans back with him to Europe.

Giovanni da Verrazzano (1485–1528) was a Florentine explorer in the service of King Francis I of France. On July 8, 1524, he wrote to King Francis, reporting on the people of what is now Rhode Island, “They live on the same food as the other people—beans (which they produce with more systematic cultivation than the other tribes, and when sowing they observe the influence of the moon, the rising of the Pleiades, and many other customs derived from the ancients)…” Native Americans boiled the bean pods at the mature stage and pulled the beans between their teeth, discarding the pods.

Francisco Vázquez de Coronado y Luján (1510 – 22 September 1554) and his fellow explorers are believed to have been the first Europeans to eat beans grown by Native Americans in what is now New Mexico, between 1540 and 1542.

Large white beans were grown for hundreds of years by the by the Mandan, Arikara, and Hidatsa people of what is now North Dakota.

Oscar H. Will (1855-1917) came to North Dakota in the spring of 1881 and was employed at Fuller Green House in Bismarck.  He purchased the Fuller Green House on July 1, 1884, and started a nursery and seed business. He soon started his experiments with native local plants. The seed company was first called Pioneer Seed House and then Oscar H. Will & Company. Will’s seeds served farmers and gardeners around the world for more than 75 years, reaching customers through a colorful, informative annual mail-order catalog, which had a circulation of 1,000 in 1881.  In 1883, Son of a Star, a Hidatsa man living at the Fort Berthold Revervation, gave Will a pouch of beans. From that pouch, Will selected beans that he bred over the next three years, developing what he named the Great Northern bean. He introduced it in 1896, and it became his company’s most famous introduction. By 1917, Will’s seed catalog had a circulation of 120,000.

Great northern beans are most commonly available in supermarkets and from farmers in the United States and Canada, mostly because this is where the beans grow naturally and are cultivated. The “great north” where the beans take their name is the upper-Midwestern United States, including states like North Dakota and Minnesota, and the Canadian provinces of Manitoba, Saskatchewan, and Ontario. These regions remain the primary growing areas, though the beans are distributed commercially throughout both countries and can be found relatively easily.

You can usually find Great Northern beans for sale in one of three ways. Fresh Great Northern beans are available at seasonal farmer’s markets. Most grocery stores sell the beans either canned or dried. Dried beans often have the closest flavor to fresh. Canned beans are more convenient, but may contain additives or extra salt added to them to help preserve their color and flavor.

For dried beans, make sure there’s no evidence of moisture or insect damage and that beans are whole and not cracked. If buying in bulk, make sure that the bins are covered and the store has a good product turnover rate to ensure maximum freshness.

Before washing dried Great Northern beans, spread them on a plate or cooking surface to check for small stones, debris, or damaged beans. Then, place the beans in a strainer, and rinse them thoroughly under cool running water.

Note that most of the phosphorus in Great Northern beans is in a storage form of phosphate called phytic acid or phytate. Seeds are how most plants reproduce. When they are eaten by animals, it is beneficial to the survival of their species if they can pass through the animal’s digestive system intact to be deposited, encased in fertilizer, elsewhere. In order for the plant to reproduce, it’s necessary that the seed pass through the digestive tract whole (undigested). Many plant seeds have developed defense mechanisms to make them more difficult to digest, including enzyme inhibitors that can interfere with digestion and other natural substances that block nutrient absorption. Phytic acid prevents premature germination and stores nutrients for plant growth. Unfortunately, it also reduces the absorption of the important minerals calcium, magnesium, iron, and zinc, and reduces the digestibility of protein. This applies not only to the minerals and protein in the food containing the phytic acid, but also the food that you eat with it. Over time, these phytates can lead to mineral deficiencies, allergies, and irritation of the intestinal tract. Only about 50% of the phosphorus from phytate is available to humans because we lack phytase, the enzyme that liberates phosphorus from phytate.

Traditionally, humans soaked, sprouted,  or fermented beans before eating them, processes that neutralizes phytates and enzyme inhibitors so that all the nutrients are more available.

When a plant seed undergoes germination, changes occur that provide the growing plant with needed nutrients. These changes include the breakdown of phytic acid, the inactivation of protease inhibitors, and the increased availability of vitamins and minerals, all of which increase the nutritional value of the seed and improve its digestibility. In nature, germination typically occurs when a plant seed encounters conditions that are favorable for growth, and that typically involves water. You can easily initiate the germination of Great Northern beans by soaking them in 2-3 cups of water per cup of beans. Soaking reduces phytic acid in about 12 hours. Soaking can also increase the content of some vitamins and help break down complex carbohydrates such as raffinose-type oligosaccharides (sugars associated with causing flatulence). Cooking also deactivates natural plant toxins that may still exist after soaking.

To prevent Great Northern beans from absorbing chemicals from the water or container that they’re soaking in, consider using a glass or ceramic container and filtered water. It may also be beneficial to use lukewarm water and increase its acidity with a tablespoon or two of lemon juice or vinegar. Soak Great Northern beans for 12 to 24 hours in water with 1-2 tablespoons of vinegar or lemon juice. Rinse well and cook as usual in 2-3 cups of fresh water per cup of dried beans.

Soaking seeds is easy; it just takes takes a little discipline. In the evening, put your Great Northern beans in a bowl and cover them with filtered water. By the next day, the beans are ready to cook.

You can cook Great Northern beans either on the stove top or in a pressure cooker or slow cooker. For the stove top method, add three cups of fresh water for each cup of dried beans. The liquid should be about one to two inches above the top of the beans. Bring the beans to a boil, then reduce to a simmer, partially covering the pot. If any foam develops, simply skim it off during the simmering process. Great Northern beans generally take about one to one and one-half hours to become tender using this method.

Regardless of cooking method, do not add any salt or acid (like tomatoes) until after beans have been cooked; adding them earlier will make the beans tough and greatly increase the cooking time. To aid in digestion, you can add to your cooking beans a four-inch strip of the sea vegetable kombu, available dried in the Asian specialty section of grocery stores. Also try adding a teaspoon of epazote per pound of beans. Epazote is a traditional herb of central America that is believed to help with digestion.

Great Northern beans are smaller than cannellinis and and suitable for any number of uses: salads, soups, stews, ragouts, purees, and so forth. Their texture is slightly grainy, with a nutty, dense flavor.