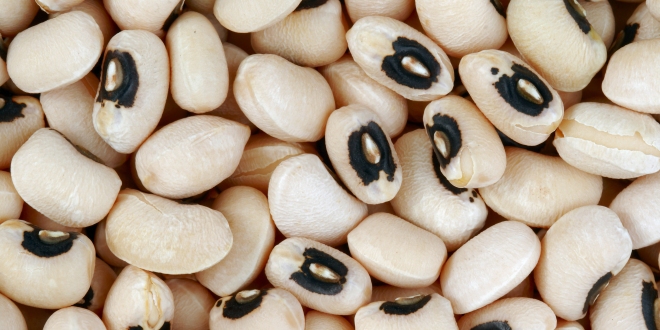 Black-eyed peas were likely domesticated in North or West Africa 5,000 years ago. In ancient Egypt, they were considered to be a symbol of good luck and fortune. The pharaohs of Egypt believed that eating black-eyed peas could protect them from the “evil eye.”

Ancient Asiatic, African, and European cultures ate black-eyed peas to protect them from the “evil eye” as well. They may have been introduced into India as long as 3,000 years ago.

Black-eyed peas were probably introduced to the New World by enslaved Africans. With the beginning of the Atlantic slave trade to the North American colonies in 1619, slave traders provisioned their ships with black-eyed peas from African ports at the peak of harvest. The beans were used as food for enslaved passengers aboard the ships.  They were  introduced into Virginia as early as the 17th century. Later, plantation owners imported black-eyed peas and other African foods like okra to inexpensively feed enslaved workers.

Most of the black-eyed pea cultivation took place in Florida and the Carolinas during the 18th century. One of the earliest records of black-eyed peas being planted in colonial times in the United States dates back to the early 18th century in the Carolinas. The tradition of consuming black-eyed peas in honor of the New Year may be tied to Jewish culture. Sephardic Jews arrived in the American South in the early 18th century. The Talmud lists the small white bean as a food to be eaten during Rosh Hashanah, the Jewish New Year, for good fortune. The Jewish traditions likely mingled with those of African slaves and other colonial residents to spread the practice of eating black-eyed peas in celebration of the New Year. Black-eyed peas were cultivated widely in Virginia following the American Revolution.

Black-eyed pea plants were often planted along the border of fields to enrich the soil with nitrogen. Cattle could also graze on the plant stem and vine, leading to the alternative names of field peas and cow peas for the plant. During the Civil War it was common for Union troops to burn Confederate crops. Southerners had been enjoying the peas for years as a mainstay of their diet; however, Union soldiers viewed them as livestock feed and not an edible vegetable. Black-eyed peas were reportedly the only food spared by Gen. William T. Sherman and his Union troops during their destructive march through the South. Similarly, the 40-day siege on Vicksburg, Mississippi, left plantation owners and slaves with little to sustain them. Southerners were so overjoyed to find black-eyed peas still in the field, and they turned to them as a primary staple of sustenance. Black-eyed peas thus helped save surviving southerners from starvation and were thereafter regarded as a symbol of good luck.

Black-eyed peas were eaten as an integral part of soups and stews and often served over rice as gumbo and the popular Hoppin’ John. The tradition of eating black-eyed peas on New Year’s Day is popular throughout the southern United States. Many believe that eating black-eyed peas, an inexpensive and modest food, show their humility and thus bring good fortune to themselves for the entire year. Others believed that black-eyed peas symbolized coins, and tucked them into their pockets or wallets to attract coins. Leafy greens, including mustard, cabbage, spinach, kale, and especially collards, were served along with black-eyed peas, because the greens resembled paper currency, and were believed to attract folding money.

By 1903, agricultural chemist George Washington Carver, was promoting black-eyed peas as excellent food and as a plant that enriched farm soil with nitrogen. In 1909, J. B. Henry, a business man from Athens, Texas, decided to grow large crops of what he called the “pitch-peepered” pea. He had trouble with weevils in the peas, and began to experiment with drying the peas in ovens to kill the creatures. He is credited with discovering the process for drying black-eyed peas, which made the pea a more viable agricultural product for shipment around the world. The dried black-eye peas were soaked, cooked, and consumed, and came into widespread use in Athens within just a few years. Several canneries opened around Henderson county in the 1930s, canning the “Home Folks” brand of black-eyed peas, which became a major source of income for the area. Special brands such as the “Good Luck Peas” for New Year’s day, and the “Texas Caviar” brand of pickled peas carried by Nieiman Marcus were also made. From the 1930s up until the 1970s, Athens was the largest producer of black-eyed peas in the world. Upon retirement by the cannery owners and subsequent closure of the plant, Athens reduced their production drastically. Starting in 1971, the Black-Eyed Pea Jamboree has been held annually in Athens at the height of harvest in July.

Throughout the South, the black-eyed pea is still a widely used ingredient in soul food and various types of southern cuisine.

Black-eyed peas have become a common food in the southern United States, where they are available dried, fresh, canned, and frozen.

There is little difference in the nutritional value of canned black-eyed peas and those you cook yourself. Look for canned beans that do not contain extra salt or additives, and whose cans do not include a liner made from bisphenol A (BPA), a plastic and resin ingredient associated with endocrine disruption. (Eden and Trader Joe’s are two brands that don’t use BPA in their cans.)

One pound of dry legumes equals about four 15-ounce cans. You can buy a pound of organic legumes in bulk for around $2.00, which is about the same price as one can. So you’re saving about 75% by going with the dry. Yes, there are energy costs in cooking, but they are small (an estimated 15 cents to run an electric burner for 2 hours; 10 cents to run a slow cooker for 8 hours). And if you purchase your bulk beans in reusable cotton bags or reused coffee cans, you are saving a lot of energy that would have gone into the production and transport of the can or plastic bag.

Store dried adzuki  beans in an airtight container in a cool, dry, and dark place where they will keep for up to 12 months. If you purchase black-eyed peas at different times, store them separately; they may feature varying stages of dryness and therefore will require different cooking times. Cooked black-eyed peas will keep fresh in a covered container in the refrigerator for about three days.

Before washing dried black-eyed peas, spread them on a light-colored plate or cooking surface to check for small stones, debris, or damaged beans. Then, place the beans in a strainer, and rinse them thoroughly under cool running water.

Note that most of the phosphorus in black-eyed peas is in a storage form of phosphate called phytic acid or phytate. Seeds are how most plants reproduce. When they are eaten by animals, it is beneficial to the survival of their species if they can pass through the animal’s digestive system intact to be deposited, encased in fertilizer, elsewhere. In order for the plant to reproduce, it’s necessary that the seed pass through the digestive tract whole (undigested). Many plant seeds have developed defense mechanisms to make them more difficult to digest, including enzyme inhibitors that can interfere with digestion and other natural substances that block nutrient absorption. Phytic acid prevents premature germination and stores nutrients for plant growth. Unfortunately, it also reduces the absorption of the important minerals calcium, magnesium, iron, and zinc, and reduces the digestibility of protein. This applies not only to the minerals and protein in the food containing the phytic acid, but also the food that you eat with it. Over time, these phytates can lead to mineral deficiencies, allergies, and irritation of the intestinal tract. Only about 50% of the phosphorus from phytate is available to humans because we lack phytase, the enzyme that liberates phosphorus from phytate.

Traditionally, humans soaked, sprouted,  or fermented beans before eating them, processes that neutralizes phytates and enzyme inhibitors so that all the nutrients are more available.

When a plant seed undergoes germination, changes occur that provide the growing plant with needed nutrients. These changes include the breakdown of phytic acid, the inactivation of protease inhibitors, and the increased availability of vitamins and minerals, all of which increase the nutritional value of the seed and improve its digestibility. In nature, germination typically occurs when a plant seed encounters conditions that are favorable for growth, and that typically involves water. You can easily initiate the germination of black-eyed peas by soaking them in 2-3 cups of water per cup of beans. Soaking reduces phytic acid in about 12 hours. Soaking can also increase the content of some vitamins and help break down complex carbohydrates such as raffinose-type oligosaccharides (sugars associated with causing flatulence). Cooking also deactivates natural plant toxins that may still exist after soaking.

To prevent black-eyed peas from absorbing chemicals from the water or container that they’re soaking in, consider using a glass or ceramic container and filtered water. It may also be beneficial to use lukewarm water and increase its acidity with a tablespoon or two of lemon juice or vinegar. Soak black-eyed peas for 12 to 24 hours in water with 1-2 tablespoons of vinegar or lemon juice. Rinse well and cook as usual in 4 cups of fresh water per cup of dried beans.

Soaking seeds is easy; it just takes takes a little discipline. In the evening, put your black-eyed peas in a bowl and cover them with filtered water. By the next day, the beans are ready to cook.

You can cook black-eyed peas either on the stove top or in a pressure cooker or slow cooker. For the stove top method, add four cups of fresh water for each cup of dried beans. The liquid should be about one to two inches above the top of the beans. Bring the beans to a boil, then reduce to a simmer, partially covering the pot. If any foam develops, simply skim it off during the simmering process. Black-eyed peas generally take about one hour to become tender using this method.

Regardless of cooking method, do not add any salt or acid (like tomatoes) until after beans have been cooked; adding them earlier will make the beans tough and greatly increase the cooking time. To aid in digestion, you can add to your cooking beans a four-inch strip of the sea vegetable kombu, available dried in the Asian specialty section of grocery stores.

Try them in the following recipes: