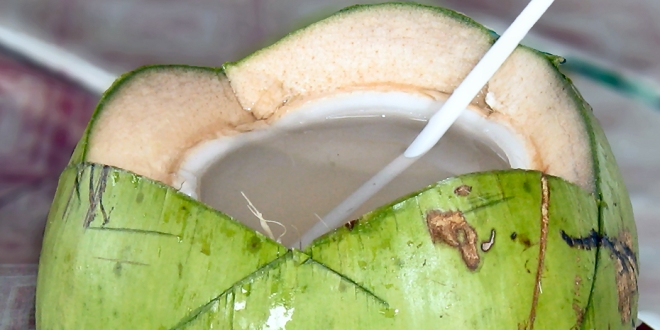 Many historians believe that coconuts originated in Malaysia and Indonesia. Early sea travelers of the East Indies may have carried coconuts with them for nourishment as well as to trade for other commodities. Many of the tropical regions where coconuts grow may have received their first coconuts via the sea, or from explorers and sea travelers.

Early Sanskrit writings reveal that the people of India were using coconuts as a staple for food and other everyday needs. In India the coconut palm was known as kalpa vriksha, which translates as “tree that gives all that is necessary for living.”

Malaysian sea travelers may have brought the coconuts to East Africa about 2,000 years ago, or it may have been Arabian sea travelers who traded crops who brought the coconuts from India. Zanzibar, an island off the East coast of Africa, depended on coconuts for food and as a cash crop for centuries. Native people used twisted cord made from coconut husks to stitch together the hulls of boats that sailed the Indian Ocean.

Venetian explorer Marco Polo (1254-1324), when encountered coconuts in Sumatra, India, and the Nicobar Islands. He called them “Pharoah’s nut,” which indicated that he was aware that coconuts grew in Egypt. Arab merchants probably brought coconuts to Egypt in the 6th century, probably from East Africa where the nuts were flourishing.

Arab traders also carried coconut shells, known as Nux Indica, to England before Portuguese sailors reached East Africa. Arab sea travelers discovered profitable goods like cowry shells and coconuts in the Maldives, islands just southeast of Sri Lanka. The people of the Maldives during the 14th century were highly regarded for their shipbuilding skills. They built vessels entirely out of products of the coconut tree including the hulls, masts, ropes, caulking, bailers, and even sails. The Arabs bought these ships.

Antonio Pigafetta (c. 1491 – c. 1531) , a nobleman from Venice who decided to explore the world as a tourist, boarded one of Ferdinand Magellan’s five ships that sailed from Spain in 1519. Pigafetta kept a daily journal of Magellan’s effort to find a western route to the Spice Islands. The crew members suffered from scurvy and starvation. When they spotted the island of Guam, they decided to go ashore. Natives wearing coconut shell masks and shaking coconut shell rattles with human bone handles greeted them. Magellan was able to negotiate for provisions, including a good supply of coconuts. Pigafetta wrote, “Coconuts are the fruit of the palm trees. And as we have bread, wine, oil, and vinegar, so they get all these things from the said trees. . . With two of these palm trees a whole family of ten can sustain itself. . . They last for a hundred years.” Sir Francis Drake journeyed from England to the Cape Verde Islands off Africa’s West Coast in 1577, where he also encountered coconuts.

Coconuts remained largely unknown outside the tropics until 1831 when Englishman J.W. Bennett wrote A Treatise on the Coco-nut Tree and the Many Valuable Properties Possessed by the Splendid Palm. Bennett described applying charcoal from the shell as a tooth cleanser, removing wrinkles with coconut water, and using the root for medicinal purposes, which spurred European interest in coconuts. Because sugar was becoming plentiful in Europe, the candy and pastry business flourished. All sorts of fruits and nuts were incorporated into confections, including coconut. Tea and spice traders began shipping whole coconuts to London, which was impractical and expensive. A French company, J.H. Vavasseur and Company, opened a processing operation in Ceylon that shredded the coconut meat and dried it thoroughly, making it easier to pack without spoilage. By the early 1890’s they were shipping six thousand tons of desiccated coconut. In 1895, Franklin Baker, a Philadelphia flour miller, received a shipload of coconuts in payment of a debt from a Cuban businessman. After a few unsuccessful attempts to sell them before they spoiled, he set up a factory for shredding and drying the coconut meat. The United States has imported its coconuts mainly from the Philippines since 1898 when the islands became a U.S. possession at the end of the Spanish-American War.

By 1900, J.H. Vavasseur and Company was shipping 60,000 tons of desiccated coconut from Ceylon. Within a few years, coconut cream pie and coconut custard became the rage. Coconut frosting and grated coconut added aroma and flavor to cakes, cookies, and candies. Before 1950, about 60 percent of the coconuts were shipped to the United States to be shredded and dried. After that time the coconut producing countries shipped the coconut meat already grated and dried.

Today coconut cultivation encircles the globe between the Tropic of Cancer and the Tropic of Capricorn, where they have sustained communities after major tropical storms destroy the rice paddies or cornfields. Coconut plantations in Indonesia, Malaysia, India, Sri Lanka, and the Philippines provide export income to these regions. Coconuts come to market in two major stages of maturity. Young coconuts are prized for coconut. The meat of the young coconut, which is very thin, soft, and delicately sweet, is gaining interest. The mature coconut is valued for its thick, firm meat used world wide in shredded or grated form, often for baked goods. Coconut in its mature stage has a rich, nutty flavor and chewy texture with a higher oil content than young coconut. Coconut milk, coconut cream, and coconut oil all come from mature coconuts.

The top three coconut water brands in the U.S. are owned or distributed by multinational beverage companies: Vita Coco (Dr. Pepper Snapple Group), ZICO (Coca-Cola), and O.N.E. Coconut Water (PepsiCo). These compnies doubled their sales between 2011 and 2012, while 100% juice sales declined 3% in the same time period.

Until a few decades ago, coconut water was a delicacy you had to enjoy locally or ship at great expense inside a bulky coconut hull. In addition, two naturally occurring phenolic-antioxidant compounds react with the enzymes of the coconut water, which begins to turn pink shortly after the coconut is cracked open. The concentration of the phenolic-antioxidant compounds seems to vary from plant to plant and therefore from coconut to coconut.

The advent of the tetra pack (juice box) and quick processing enabled packagers to produce coconut water with a moderate shelf life without sugar and preservatives. Unfortunately, the tetra packs are not recyclable in most places. Packagers also developed processing methods that preserved the nearly clear quality of the fresh product, even though the change in color is completely harmless.

On average, coconut farmers in developing countries sell coconuts to wholesale buyers for 15-25 cents per coconut. A tree will produce anywhere from 30 to 70 coconuts per year. So, in one year, a tree will give a farmer a maximum income of around $17.50. Meanwhile, on the retail end, one single-serving of ZICO, which is roughly the quantity of water in one coconut, sells for around $1.87. There are alternatives. Big Tree Farms works with around 6,000 organic coconut farmers in Indonesia, where they pay a higher than average rate for the coconuts. Harmless Harvest, the makers of a raw coconut water product sold at Whole Foods and elsewhere, works with organic farms in Thailand engaged in agroforestry, practices that incorporate a diverse array of species into the coconut orchards.

Another downside to imported coconut water is the tremendous amount of resources used in shipping it from the tropics to consumers in the U.S., Japan, and Europe. Coconut water is, on average, 97 percent water and only 3 percent nutrients. It is packaged in containers (glass, cans, and tetra packs), many of which are not recycled. It is environmentally unsustainable to use fossil fuel, and create unnecessary carbon emissions, shipping water, glass, aluminum, cardboard, and plastic halfway around the world. In response, Big Tree Farms developed a product called Coco Hydro, which is essentially dehydrated coconut water that can be mixed into an ordinary glass of water to add flavor, electrolytes, and other nutrients, but it still costs $1.49-$1.99 for just two servings.

Because it has the same concentration of solutes as human plasma, coconut water can be used in extreme emergencies to quickly rehydrate the human body if administered intravenously.

While coconut water has less sugar and more electrolytes than other beverages, it can be costly unless you live in the tropics, where fresh tender coconuts are readily available in markets year-round. However, they require importation into temperate and cold regions. Ready-to-use, prepared, tender coconuts are available in the U.S. and Canada, imported from Thailand and Malaysia. In the stores, coconut water is also available in packages; however, the overall nutritional profile of these products may not be as good as fresh coconut water in terms of vitamins and enzyme levels, and additives and preservative are often added in order to enhance shelf life.

At home, store raw tender coconuts at room temperature for about 5-10 days. Once opened, the juice can turn sour and pink due to intense enzymatic activity. It’s best to drink it immediately or store it in the refrigerator and consume it within 24 hours.

Here are some ways to use coconut water: