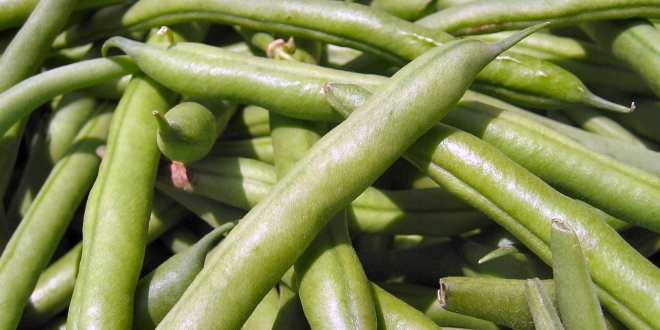 Green beans and all 200 varieties of P. vulgaris originated in the tropical southern part of Mexico, Guatemala, Honduras and part of Costa Rica, where they were cultivated as early as 8,000 years ago.  They spread from this center of origin to North and South America.

European explorers, including Christopher Columbus, found the climbing beans typically planted alongside corn. In Columbus’s diary from November 4, 1492, he describes lands in Cuba planted with faxones and fabas “different than ours.” Later he encounterd fexoes and habas that were different than the ones he knew from Spain. Faxones and fexoes were probably cow peas and fabas and habas were fava beans. The beans Columbus found were undoubtedly common beans, Phaseolus vulgaris. When Christopher Columbus returned from his second voyage to the New World in the year 1493, he brought the common beans back with him to Europe.

Giovanni da Verrazzano (1485–1528) was a Florentine explorer in the service of the King Francis I of France. He is renowned as the first European since the Norse expeditions to North America around AD 1000 to explore the Atlantic coast of North America between the Carolinas and Newfoundland, including New York Bay and Narragansett Bay in 1524. On July 8 of that year, he wrote to King Francis, reporting on his discoveries. He wrote of the people of what is now Rhode Island, “They live on the same food as the other people—beans (which they produce with more systematic cultivation than the other tribes, and when sowing they observe the influence of the moon, the rising of the Pleiades, and many other customs derived from the ancients)…”

During this time, green beans had a “string” that ran on the outer curve of the pod shell. This led to the nickname “string beans.” Native Americans prior to contact with Europeans did not eat green beans the way we do. They boiled the pods at the mature stage and pulled the beans between their teeth, discarding the pods. To them strings were not an issue.

In 1532, Pierio Valeriano received a bag of common bean seeds as compensation for work at the court of Pope Clemente VII, which the Pope had received from the Spanish Emperor Charles V. Valeriano sowed the seeds in its fields located in Belluno province of the Veneto region in Northeastern Italy. Subsequently, Valeriano described in a short poem in Latin entitled ‘De Milacis Cultura’, the cultivation technique, the plant and seed morphology, and the supposed therapeutic properties of beans. The common beans spread quickly in the Veneto region, particularly in Belluno province.

The first drawings of the common bean in a European work is likely a 1543 woodcut in the German herbal of Leonhart Fuchs. Ten years later, in 1553, another German herbalist, Georg Oelinger, made a watercolor of a red pole bean that is probably related to the variety known today as frijoles rojos, or Montezuma Red. Common beans were introduced in France in 1597, although they weren’t immediately popular.

Samuel de Champlain (1574–1635) described the companion planting of corn, beans, and squash near what is now Saco, Maine on July 9, 1605. He founded New France and Quebec City on July 3, 1608. Green beans spread into the eastern Mediterranean and by the seventeenth century, were cultivated in Greece and Turkey.

In the 19th century, the French made green beans a household vegetable, with the name haricot verts branding them as “French beans” in the minds of many Europeans. The ‘Beurre de Rocquencourt,’ an heirloom wax bean, was named for Rocquencourt, France, a town in France’s rich farming country. Wax beans were introduced to France in the 1840’s from Algeria, and this variety is surely a descendant of those early beans. These beans are favored by cooks for their fine-flavored pods that are a bright waxy-yellow in color.

The Kentucky Wonder pole bean was introduced in 1877 by Ferry-Morse Seed Company. The first “stringless” bean was developed by Calvin N. Keeney (1849–1930), called the “father of the stringless bean”, while working in Le Roy, New York. Keeney established a seed company at LeRoy as an outgrowth of his interest in green beans. By examining beans in the field, he was able to identify plants with stringless traits. Through careful selection and breeding, he became the leading producer of high-quality string­less beans, beginning with Keeney’s Stringless Refugee Wax in 1884. Keeney also developed many varieties that were sold by other seed companies, the best known being Burpee’s Stringless Green Pod, introduced in 1894.

Blue Lake Green Beans are named for the area in which they were developed in the early 1900s, the Blue Lake area near Ukiah, California, US. They were originally developed for canning. By the mid-to-late 1920s, the beans had been developed into stringless bean for use as a green bean, probably in Oregon. The Tendergreen variety of green beans came on the scene in 1925.

Campbell’s Cream of Mushroom soup has been around since 1934. It was widely used as casserole filler in the Midwest, and was sometimes referred to as “Lutheran binder.” Dorcas Reilly grew up in Camden, New Jersey, and earned a degree in home economics at Drexel University in 1947. She began working in at the Campbell’s Soup Company in Camden in 1949. Campbell’s had its own test kitchen, dedicated to pumping out recipe pamphlets. Reilly set out to make a quick and easy dish that could be made from ingredients that most Americans have in their pantries. She determined that most households had Campbell’s Cream of Mushroom soup and green beans. With these two staples, in 1955, Reilly successfully devised and tested the infamous Green Bean Casserole recipe. The fried onions on top were an easy way to add texture and brighten the color of a grey-green dish, and to add a certain festive touch to the mundane casserole. Reilly’s recipe was immediately popular. It was the perfect recipe for the holidays, as it was made with minimal ingredients that were almost always on hand, and it could easily be made the day ahead and reheated when guests arrived.

The breakthrough Bush Blue Lake bean was introduced by Asgrow in 1962. That strain combined the great flavor of the Blue Lake pole bean with a bush habit. The pole bean Kentucky Blue, bred by bred by Rogers Bros. Seed Company, was a cross between Blue Lake and Kentucky Wonder. It was an All-America Selections winner in 1991.

The popularity of green bean casserole continues today, even in the face of America’s recent obsession with fresh, locally grown foods, and for good reason: green bean casserole has become a traditional Thanksgiving and Christmas dish, and in most parts of the country, fresh, local green beans are not available in November and December. When I lived in Scottsdale, Arizona, organic local produce was most abundant in the winter months, and I developed my recipe for Fresh Green Bean Casserole. Here in North Carolina, as in with much of the country, fresh green beans are a summer crop. Perhaps Fresh Green Bean Casserole should become a summer holiday tradition. In any case, an estimated 40% of the Cream of Mushroom soup sold in the US today goes into making green bean casserole. And nearly all varieties of edible pod beans today are grown without strings.

Green beans are available year round, with a peak season of May to October.

Green beans should be slender, straight-sided, and blemish-free. They should look and feel firm, not as stiff as a stick, but fairly stiff, and if you break one it should snap sharply, with a spray of juice from the seam. Avoid green beans that are soft or flaccid, as they are no longer fresh. Also avoid green beans with obvious seed bumps pressing up through the pods, as they were left too long on the vines. Finally, select a bunch of beans that are all roughly the same thickness and length, as they will cook at a uniform rate.

Green beans will keep for about 4 days, wrapped and refrigerated.

Rinse beans thoroughly in clear, cool water. Lift beans from the wash water and leave dirt and other debris behind. Rinse again.

You may occasionally still come across green beans that have strings. Remove them by snapping off an end and pulling the string away with the end. However, most beans sold now are stringless, and all you need do to prepare them is trim the tips.

Beans can be cooked whole, cut crosswise, diagonally or French-cut. If you want sweet tasting, crisp fresh beans, cut them as little as possible. Cut older, more mature beans in the French style: slice them lengthwise and then diagonally.

Steaming or stir-frying preserves the best qualities of the fresh bean. Whatever cooking method you choose, remember to cook beans as little as possible using the smallest amount of water possible. Also, the fewer beans in the pan, the quicker they cook and the better they taste. If cooking more than one pound (4 cups) at a time, use separate pans.

To steam beans, bring water to a gentle boil in a large saucepan over medium-high heat. Add trimmed green beans to a steamer basket and steam, covered, 4 to 5 minutes or until crisp-tender. You may need to experiment with the degree of tenderness you like.