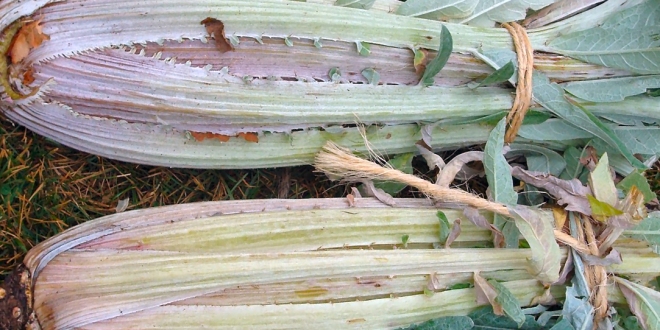 Cardoons are native to the western and central Mediterranean region, and people have eaten them for a long time. Wild cardoon is the likely ancestor of both cardoons and artichokes. Gardeners who selected for large, non-spiny heads produced artichokes and gardeners who selected for non-spiny, large-stalked, tender leaves produced leafy cardoons. Roman gardeners were likely the first to grow cardoons. Romans dipped tender, young cardoon stems in warm olive oil and ate them raw. They baked, steamed, or fried the bigger stems. In his treatise, De re rustica, the Roman agricultural theorist Columella (4–ca. 70 AD) noted that the dried stamens of cardoons were used as a vegetarian rennet to coagulate milk into cheese. Pliny (23–79 AD) wrote that cardoons were cultivated for their medicinal value, and the leaves in particular have been used in traditional medicine for chronic liver and gall bladder diseases, jaundice, hepatitis, arteriosclerosis, type-2 diabetes in its early stages, and as a diuretic as well as a digestive aid. They can help disperse stones in the internal organs and are believed to be good for rheumatism.

Cardoons expanded north with the Roman Empire as far as the climate permitted. Cardoons, like artichokes, are frost-tender, so they never became established in Britannia or northern Gaul, but they were popular in warmer regions. To this day, cardoons are enjoyed in Spain, southern France, and northern Italy. Cardoon rennet cheeses were made by shepherds high in the Iberian mountain range now known as the Serra da Estrela. Over subsequent generations, cardoon cheese production spread through southern Portugal and into western Spain, where the technique is still used today.

The flavor of mature cardoon stalks was bitter, but when blanched, it became milder than that of artichoke. Its cultivation was also very labor-intensive: “Towards the middle of October, the plants will be large enough, and ready for blanching. This is done on a dry day, by first gathering up all the leaves closelv round the centre, and in that position binding them together with strands of mat or twigs. This done, each plant is earthed up in the manner of celery, so that the points of the highest leaves are only exposed at top. In two or three weeks the leaf-stalks will be sufficiently blanched.”–Charles Frederick Partington, The British Cyclopædia of Natural History (London, 1825). Because the plants grew four to six feet tall, compacting earthen mounds around the stalks required substantial digging and shaping. Because the leaf stalks, like those of other thistles, had many thorns, tying them into a bunch could be treacherous. Depending upon the variety planted, the cardoons had to be in soil four to five weeks in order to be properly blanched and tenderized, but it also had to be harvested before the first frost, so timing had to be precise.

The word for thistle in Latin is cardo. The word for “big thistle” is cardone in Italian and chardon in French. Swiss cooks wanted to prepare cardoons, but Switzerland is too cold for cardoons to grow. Farmers bred beet greens, Beta vulgaris, into a more cold-tolerant plant with a fat, white, succulent, mild-flavored stalk that could be prepared like chardon. This vegetable became known as chardon Suisse in French and “Swiss chard” or chard in English.

Spanish explorers brought cardoons to South America. The first cattle were introduced into Argentina in 1549; they reached the Pampas in the 1580s and found a very favorable habitat for expansion. Their hooves destroyed the native turf, allowing feral cardoon seeds to germinate. Cattle dung fertilized the soil, and the cardoon patches became thistle jungles. The cardoons lost their domestic traits and reverted to their original thorny forms. The feral cattle could also take cover in the feral cardoon forests to avoid domestication and slaughtered. They moved southwards towards Patagonia where natural selection and tough environmental constraints shaped them into a new variety, the “Creole” breed.

By the 18th century, Quakers had introduced cardoons to North America. They were among the largest plants grown in North America prior to the rise of industrial agriculture.

On September 19th, 1832, biologist Charles Darwin visited the remote Argentine settlement of Guardia del Monte, and noted that the village marked the southernmost limit of the cardoon infestation on the pampas. Darwin noted patches where cardoons stood as high as a horse’s back in stands that covered hundreds of square miles.

In North America, because cardoons preferred warmer climates and richer soils, they were mainly grown by southern farmers, but sold in northern cities from the 1850s to the First World War. Grown for the blanched mid-rib of the leaf, they became one of the fancy vegetables found on hotel menus in major urban centers, where celebrity chefs prepared them in a range of dishes during fall and winter.

Nutrients in 100 Grams of Boiled Cardoons

Cardoons resemble a bunch of wide, flat celery. You can find them in markets in mid-winter through to early spring. Look for firm, crisp stalks with a silvery gray-green color. Choose the lightest colored cardoons, because the greener they are, the more likely they will be bitter.

Refrigerate cardoons in a sealed container up to one week.

To prepare, remove tough outer stalks. Wash the inner stalks well. Trim the base and tops. Peel the back of the stalks before cooking them. Be careful, because cardoons are thistles, and just like artichokes, they have thorns, albeit quite small.  The thorns are located on the edges of the stalks and need to be trimmed. Cut the stalks into 2-3 inch pieces. If you are not going to cook them immediately, soak them in water in which you have mixed the juice of a lemon. This will prevent them turning brown. Boil, braise or bake until tender (some recipes call for boiling up to 30-40 minutes). You can also use them in long-simmering soups and stews. You can also use them in a gratin by baking them in a cheesy sauce for 20 minutes until the sauce is bubbling and brown. When you cook them you won’t need to add salt as they contain sodium naturally. The roots can be cooked like parsnips.

When cardoons are cooked, their flavor is a cross between artichoke, celery, and salsify. They’re a popular Italian vegetable.