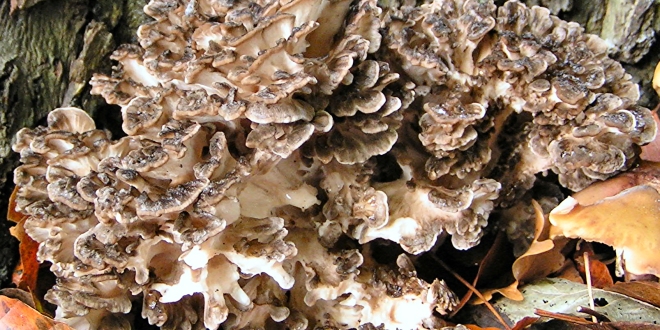 Maitake (Grifola frondosa) is a polypore mushroom that grows in clusters at the base of trees, particularly oaks. It is commonly known among English speakers as hen-of-the-woods, ram’s head, and sheep’s head. In the United States supplement market, as well as in Asian grocery stores, the mushroom is known by its Japanese name maitake (舞茸), which means “dancing mushroom.” In Italian American communities in the northeastern United States, it is commonly known as the signorina mushroom.

For most of human history, maitake was foraged in the wild. It grows at the base of oaks and other deciduous trees from September to November, often reappearing each season for several years. Maitakes are parasitic to the tree, and will very slowly kill a tree by causing rot in the heartwood and sapwood. They generally are very common in the Eastern United States, are present in the Midwest, and are not present in the West except for the Pacific Northwest.

Maitakes are polypores, meaning that they have pores on their undersides instead of gills. They appear as a large, clustered mass of greyish-brown, dry, spoon-shaped fronds. Each frond will vary in size depending on age, but can be a nub or up to 3″ (7 cm) wide. The pores on the underside should be white, though they will yellow with age. The stems or stalks are tough and off center, or usually attached to the sides of the fronds. The spore print is white. Clusters of maitake may weigh up to 100 pounds, but most are around 5 pounds each. Like all polypores, maitake become inedible when they are older, because they are too tough to eat. There are no dangerous look-alikes.

Maitakes have long been celebrated for both their culinary appeal and reported medicinal qualities, but maitake has only been cultivated since the mid-1980’s in Japan. Mass production followed about 5 years later. Part of the reason for the relative delay in the onset of human cultivation of this mushroom stems from its biology. Maitake grows at the base of large oak trees, emanating from the center of the trunk or from large rotting roots, rather than from logs, like wood ear, shiitake, and enoki. So it was not easily cultivated by the log method, resulting in the delay in its domestication. An outdoor bed method was developed, but it was the revolution of artificial mushroom cultivation on enriched sawdust that allowed maitake to join the ranks of widely cultivated mushrooms. By 1999, Japanese cultivators produced nearly 40,000 metric tons and in 2001 China produced 14,600 metric tons. Annual production in China and Japan has steadily increased due to the popularity of this mushroom.

It wasn’t until a slightly modified technique of shiitake bag cultivation was adapted to maitake that maitake became more available at any time of year. Even more recent is the development of strains that can be cultivated in plastic bottles. The advantage of cultivating mushrooms in bottles is the availability of mechanization that makes the method less labor intensive and more cost effective. Also, since the bottle size is usually smaller than bags that are used to cultivate mushrooms, the result is a beautiful little retail-sized mushroom cluster. The introduction to the US market of maitake grown by this method has only occurred in the past decade.

When selecting maitake mushrooms, look for whole clusters where the ruffles are firm, and all or nearly all ruffles are intact. Avoid maitakes that appear dry or wilted. One whole cluster in the store can weigh between a quarter to greater than half a pound. Wild-foraged specimens can be many times larger. If you find three or four you can easily have 20-50 lbs. of mushrooms. Ideally, you should select an amount that suits your needs and prepare them the same day you take them home.

If you are able to forage for wild maitakes, you will need to clean them well. If the mushrooms you find were growing under a rotten tree, the mushroom can actually grow around the wood particles and they’ll be embedded in the mushroom flesh. Those mushrooms may not worth cleaning unless they are all you have.

Set the mushrooms in a large bowl and pick off all the acorns, leaves, and twigs. Brush off dirt with a mushroom brush or unused paintbrush using lots of quick, brisk strokes, working from top to bottom. Using a sharp paring knife, cut off the dirtiest parts of the base, and move mushroom to a clean cutting board. Wipe off the knife and cut through the remaining base into workable sections as if you’re cutting up a cauliflower through its core. Cut off rotten, bruised, or moldy sections, and add to the bowl. Remove worms and bugs out of the crevices with the tip of the knife.

Cut the pieces into smaller pieces, 1-3 inches wide depending on your purpose. Cut into any areas with lots of crevices to remove any hiding insects. The central part of the mushroom is tender in young specimens, although it may be too tough in older ones. Wipe off any remaining dirt on each piece with damp paper towels. You will go through quite a few of them. What you end up with is something like little mushroom florets.

Cover with damp paper towels and plastic wrap with some holes poked in it. It’s best to cook them right away, but they will last in the refrigerator for several days this way (the paper towels will need remoistening).

You can also store the freshly cleaned mushroom pieces in an airtight container in the freezer for up to two years. Use reasonable serving size bags, because it’s easier to use a whole (small) bag, then to try to break the frozen clump. You can also chop the mushrooms into different size pieces in different bags to use different ways. If you have cleaned the mushrooms well, you can defrost them right in the pan.

To dry maitake, place slices of it in a dehydrator at 125F, or in your oven on the lowest setting with the door propped open with a dishtowel or wooden spoon. The mushrooms should be crispy-dry within 4 hours.

Maitake may be the most versatile mushroom of all. It has a unique, subtle flavor and a pleasant, crunchy, chewable texture all the way down the stem. It is great sautéed, microwaved, boiled, and dried. Sautéed maitake freezes well and certainly makes excellent duxelles (mushroom spread). You can use these versatility mushrooms in tapenade, calzones, consommé, pasta sauces, burger toppings, or just eat them sautéed on toast.You can eat dried maitake like chips with your favorite dip. Larger, older dried maitake might be a little chewy when rehydrated and would be best made into powder. The dried mushroom powder can be used to add flavor to nutloaf, pasta sauce, gravy, béchamel sauces, and so forth. You can use a lot because the powder has a subtle flavor.