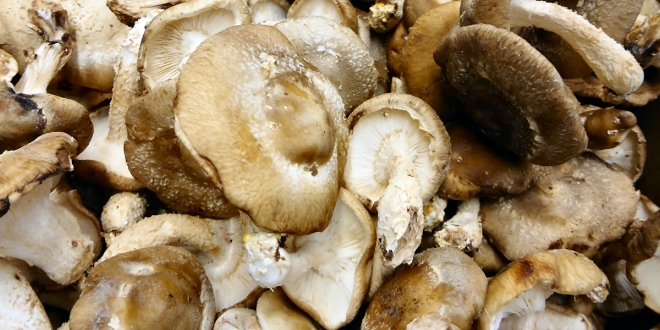 Shiitakes (Lentinula edodes) are edible mushrooms, which are also considered medicinal mushrooms in some forms of traditional medicine.

Shiitake are native to Japan, China, and Korea and have been used in all three countries since prehistoric times. Ancient Asian healers prescribed shiitakes for a host of ailments including cold, flu, sinus problems, headache, measles, worms, constipation, hemorrhoids, gout, liver disorders, nutritional deficiencies, poor circulation, and sexual dysfunction. The oldest record of the shiitake mushroom dates back to 199 AD in Japan, when natives of Kyushu presented Emperor Chūai with a gift of shiitake mushrooms.

Shiitakes have been cultivated for over 1,000 years. The first written record of shiitake cultivation can be traced to Wu Sang Kwuang in China, born during the Song Dynasty (AD 960–1127).

During the Ming Dynasty (1368-1644), shiitake mushrooms were considered the “elixir of life” and were reserved for the emperor and his family. Physician Wu Juei wrote that the shiitake mushroom could be used not only as a food but as a medicinal mushroom, taken as a remedy for upper respiratory diseases, poor blood circulation, liver trouble, exhaustion and weakness, and to boost qi, or life energy. It was also believed to prevent premature aging.

The Japanese cultivated the shiitake mushroom by cutting shii trees with axes and placing the logs by trees that were already growing shiitake or contained shiitake spores.

To make shiitake available year round and to speed the time to fruiting, the plastic bag method using enriched sawdust was developed in the early 1970s.

In 1982, Gary F. Leatham published an academic paper based on his research on the budding and growth of the Japan Islands variety of shiitake mushrooms; the work helped make commercial cultivation possible in the United States. Now American consumers can purchase fresh shiitakes at almost any grocery store.

Fresh and dried shiitake mushrooms are available throughout the year. Look for shiitake mushrooms that are firm, plump, clean, and brown. Avoid those that are wrinkled or have wet slimy spots. Choose certified organic mushrooms to avoid contamination with synthetic herbicides, insecticides, and heavy metals.

The best way to store loose shiitake mushrooms is to keep them in the refrigerator set at 38 degrees Fahrenheit (3 degrees Celsius) in a loosely closed paper bag. This storage methods will help preserve the mushrooms’ moisture without causing them to become soggy or slimy and keep them fresh for several days. Refrigerator storage is especially important for preserving the mycochemicals in shiitake mushrooms. Do not leave mushrooms sitting out on the counter top or store them in a cabinet.

Store dried mushrooms in a tightly sealed container in either the refrigerator or freezer, where they will stay fresh for six months to one year.

Mushrooms are so porous that if they are exposed to too much water, they will quickly absorb it and become soggy. Clean them using little or no water by wiping them with a slightly damp paper towel or kitchen cloth, or use a mushroom brush.

To prepare, gently break off the stems with your hands. The stems are too tough to use.

To sauté shiitake mushrooms, heat 3 tablespoons of broth over medium heat in a skillet. When the broth begins to steam, add sliced shiitake mushrooms and sauté for 7 minutes. Stir constantly for the last 4 minutes of cooking. Toss with your favorite dressing or seasonings. Large shiitakes can also be grilled or broiled. Lightly spritz caps with oil to keep them moist, and season with salt and pepper. Grill or broil 4 to 6 inches from heat source for 4 to 6 minutes on each side, spritzing with oil or water once or twice. Virtually any and all seasonings go well with mushrooms.

One thought on “Stir-Frying Shiitakes”