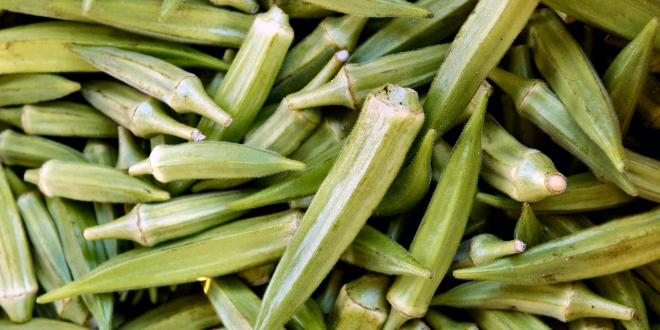 Okra (Abelmoschus esculentus), known in many English-speaking countries as lady’s fingers, bhindi, or gumbo, is a flowering plant in the Malvaceae family, along with cacao, cotton, and hibiscus.

Okra likely originated in an area that includes present-day Ethiopia, the mountainous or plateau portion of Eritrea, and the eastern, higher part of the Anglo-Egyptian Sudan. It still grows wild along the White Nile and elsewhere in the upper Nile country as well as in Ethiopia. It was probably taken from Ethiopia to Arabia across the narrow Red Sea or the narrower strait at its southern end. From Arabia, okra was spread over North Africa, completely around the Mediterranean, and eastward. The absence of any ancient Indian names for it suggests that it reached India after the beginning of the Christian Era. Arabs likely took it into Egypt from the East when they conquered Egypt in the 7th century, and later into Spain, because both the Egyptians and the Spanish Moors of the 12th and 13th centuries used an Arab word for okra,

Okra was introduced to the New World, supposedly from Africa, and had reached Brazil by 1658. It was known in Surinam in 1686.

Okra was likely introduced to North America by the French colonists of Louisiana in the early 18th century. It was being grown as far north as Philadelphia in 1748; Jefferson said it was known in Virginia before 1781, and from about 1800 onward numerous garden writers had something to say about it. Several distinct varieties were known in 1806.

Okra is rich in numerous vitamins, minerals, and other nutrients that are responsible for the health benefits the plant has to offer. Okra can:

Okra pods grow very fast, and in hot weather will become unfit for use in less than a week from the time they start developing from the pollinated flower. If you grow okra at home, check the plants at least every second day and harvest the pods when they’re only three to five days old.

Fresh and immature okra pods are readily available in stores year-round. Select crisp pods with a rich green color. Avoid pods that are soft or over-ripened, or have sunken, discolored spots or cuts.

At home, store okra in the refrigerator. Eat it while it is fresh to obtain the most vitamins and antioxidants.

Wash the pods thoroughly to remove dust, soil, and any residual pesticides. Trim the top stem end using a paring knife. Then, slice the pod as desired.

Okra is easily dried for later use. A little dried okra in prepared dishes produces much the same results as does the fresh product.

Okra is rarely served alone, as many people consider it too “gooey,” or mucilaginous. Often, you’ll find it batter fried and served as a side dish. Usually, just a little of it is cooked with other vegetables or put into soups and stews. Serve it with a Punjabi flair by making Bhindi Masala.

You can also eat okra leaves raw in salads or cooked like chard or dandelion greens.