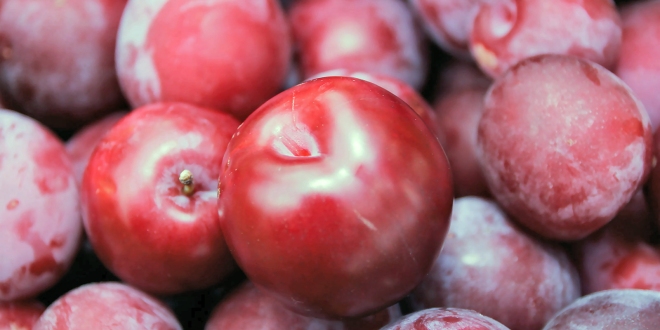 Plums are fruits of the genus Prunus, which includes apricots, peaches, cherries, nectarines, and almonds. They all belong to the Rosaceae family, along with strawberries, blackberries, raspberries, quinces, apples, pears, and ornamental trees and shrubs (such as roses, meadowsweets, photinias, firethorns, rowans, and hawthorns).

There are between 19 to 40 species of plums, although only two species, the European plum (Prunus domestica) and the Japanese plum (Prunus salicina and hybrids), are commonly sold.

The European plum may have originated in the Caucasus Mountains near the Caspian Sea. The prune (dried plum) was a staple food of the Tartars, Mongols, Turks, and Huns.

Plums were prominent in the writings and songs of Confucius (550 BC–479 BC), which include a listing of popular foods of Chinese culture. These were likely the Japanese plums, which actually originated in China, but derived their name from the country where much of their cultivation and development occurred.

In 65 BC, Pompey the Great introduced plums to the orchards of Rome, and Alexander the Great eventually brought them to the rest of the Mediterranean regions. There were soon over 300 varieties of European plums in ancient Rome.

European plums made their way across the Atlantic Ocean with the pilgrims, who introduced them into the United States in the 17th century. Early American colonists found wild plums growing along the east coast, but today the common European plum has replaced the native wild plum in popularity and as a commercial crop.

The earliest reference to plum history in the American colonies came from Prince Nursery of Flushing, New York, which was established in 1737 and reported in 1771 in an advertisement “33 kinds of plums” for sale. These plum trees were most likely European plums, Prunus domestica.

After the year 1755, Henry Laurens, who lived in Charleston, South Carolina and served as a President of the Continental Congress, introduced olives, limes, ginger, everbearing strawberry, red raspberry, and blue grapes into the United States. From the south of France he introduced apples, pears, plums, and the white Chasselas grape. William Bartram, who was a friend of Henry Laurens, described two species of American plums in his book, Travels, during his 1792 trip to Georgia, where he identified the Chicasaw plum, Prunus chicasaw, and in Alabama, he found a wild plum, Prunus indica.

In 1885, Luther Burbank imported twelve plum seedlings from all over the world and interbred them. His famous line of plum trees became popular in the late 1890s and are still grown today, including Burbank, Santa Rosa, Wickson, Golden, Satsuma, Shiro, and Ozark Premier.

Today, the United States, Russia, China and Romania are among the main producers of commercially grown plums. Plums are now the second most cultivated fruit in the world, second only to apples.

The fresh version (plums) and the dried version (prunes) of the plant scientifically known as Prunus domestica have a high content of unique antioxidant phenol phytochemicals called neochlorogenic and chlorogenic acid. They also contain flavonoids, including the anthocyanidin pigments cyanidin and peonidin. are powerful antioxidants that fight aging and prevent disease. Plums contain flavonols (Flavan-3-ols) called catechins, that help support healthy circulation by helping your arteries stay flexible. They also contain the flavanone hesperidin, which strengthens your blood vessels and and helps prevent hemorrhoids, bruising, and varicose veins. Hesperidin may also have anti-inflammatory effects, may also treat cancer, and some autoimmune diseases, may also alleviate hay fever and other similar allergies, and works together with vitamin C to maintain the health of collagen and connective tissues, which prevents sagging and wrinkling of your skin.

Plums are a good source of vitamin K, which is essential for blood clotting and bone metabolism and help reduce Alzheimer’s disease in the elderly. Plums are also a good source of potassium, which is an important component of cell and body fluids that helps control heart rate and blood pressure.

Plums are available year-round, but they are at their best between May and September. If you want to purchase plums that are ripe and ready to eat, look for ones with a rich color and sweet aroma that yield to gentle pressure and that are slightly soft at their tip. They may still have a slight white “bloom,” indicating that they have not been over handled. Avoid plums that are excessively soft, or with cuts or bruises.

While you can also purchase plums that are firm and ripen them at home, avoid those that are excessively hard as they will be immature and will probably not develop a good taste and texture. Keep slightly hard mature plums at room temperature until they ripen. Check on them frequently over the next day or two to ensure that they do not become overripe. Place ripe plums in the refrigerator, but bring them to room temperature before eating them in order to enjoy their rich flavor. While plums can be frozen, to ensure maximum taste, remove their pits before placing them in the freezer. Dry plums (prunes) can be stored at room temperature.

Wash plums in cold running water just before using. Enjoy fresh ripe plums as a whole along with their skins.

Here are some serving tips: