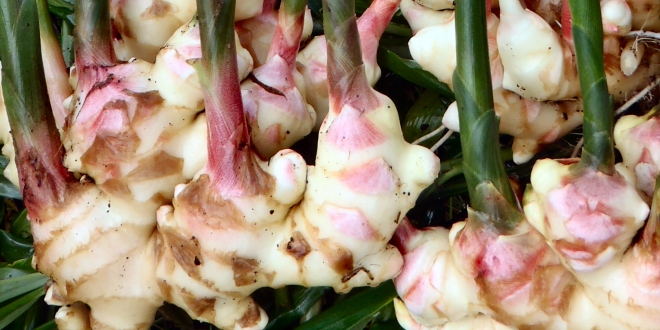 Ginger is the rhizome of the plant Zingiber officinale.  It is a member of the Zingiberaceae family, along with turmeric, cardamom, and galangal.

People have consumed ginger for over 3,000 years. It is native to Asia and has long been a staple in Asian cooking. Ginger is mentioned in ancient Chinese, Indian, and Middle Eastern writings, and has long been prized for its aromatic, culinary, and medicinal properties. An early form of gingerbread can be traced to the ancient Greeks and Egyptians who used it for ceremonial purposes.

After the ancient Romans imported ginger from China almost two thousand years ago, ginger use in Europe remained centered in the Mediterranean region during the Dark Ages, until eleventh-century crusaders and later, Marco Polo, reintroduced Asian ginger to Europe.  Because it was imported from Asia, it was a very expensive spice, but it was still in great demand.

In an attempt to make ginger more available, Spanish explorers introduced it to the West Indies, Mexico, and South America, and in the 16th century, these areas began exporting it back to Europe. As ginger and other spices became more affordable, gingerbread became popular. An early European recipe consisted of ground almonds, stale breadcrumbs, rosewater, sugar, and ginger. The dough was pressed into wooden molds shaped like religious symbols. The finished cookie might be decorated with white icing to bring out the details in relief. The first gingerbread man is credited to Queen Elizabeth I, who impressed visiting dignitaries by presenting them with one molded to look like them. Gingerbread tied with ribbon was popular at fairs and became a token of love when exchanged. In this age before refrigeration, ginger also masked the smell of food that had started to go bad.

Ginger is popular in the Caribbean Islands, where it now grows wild. Jamaican ginger is prized for its strong flavor, and this island currently provides most of the world’s supply, followed by India, Africa, China, Fiji, Indonesia and Australia.

Ginger is low in calories, but is a very rich source of many minerals, including potassium, magnesium, manganese, and copper, and vitamins such as vitamin C, vitamin B6, choline, and niacin that are essential for optimum health.

If you’re lucky enough to have a local farmer who sells young (or “baby”) ginger (like the ones pictured here), or if you’re clever enough to grow your own, by all means, try it! In the store, you’ll probably have to settle for the brown, mature ginger in the produce section. In either case, choose organic, fresh ginger over the dried, powdered, or ground form, because it is superior in quality and flavor and contains significantly higher levels of phytochemicals. Fresh roots should feel heavy in hand, have a firm, smooth, light brown peel that is free from dark spots or mold.

Fresh ginger roots can be shredded, finely minced, sliced, or grated. I usually just cut off about an inch and put it in the food processor along with a couple of garlic cloves. The most tender portion of the root is directly beneath the skin. The center has a much more powerful flavor and is more fibrous. The fibers run vertically down the root, shred fresh ginger in the same direction as the fibers. It is not necessary to peel the root.

Fresh ginger has a pungent flavor and spicy, peppery taste that hits your palate and nostrils. In order to keep the fragrance and flavor intact, add it at the last moment in cooking, because prolonged cooking results in the evaporation of essential oils.

To substitute fresh ginger for the ground spice, use about 1 tablespoon grated fresh root for 1/8 teaspoon ground ginger.

Here are some ideas for adding ginger to your meals: