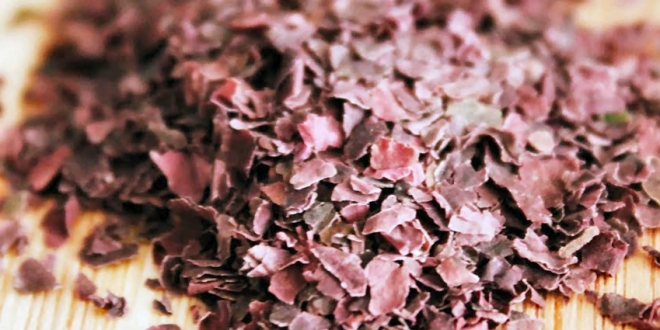 Dulse (Palmaria palmata) is a red alga that is a member of the Palmariaceae family. It is also called dillisk or dilsk (from Irish/Scottish Gaelic duileasc/duileasg), red dulse, or sea lettuce flakes. This seaweed is known as creathnach in Irish Gaelic and dilysg in Welsh; it is known as Sheep’s Weed in Scotland and is sometimes also called dilse. It grows on the northern coasts of the Atlantic and Pacific oceans.

People have harvested dulse for many centuries, and the earliest recording of it is over 1400 years ago, when St. Columba (7 December 521 – 9 June 597) and the monks of Iona ate it. In Iceland, where it is known as söl, it has been an important source of fiber throughout the centuries, and was mentioned in the Icelandic Sagas of the 10th and 11th centuries. The Irish have used dulse since at least the twelfth century when it was mentioned in a poem describing the duties of monks. Welsh legends feature dulse in the late-twelfth-century Mabinogi of Math mab Mathnowy as one of the things that the enchanter, Math, uses to build a boat. In Synopsis stirpium Hibernicarum, published in 1726 in Dublin, Caleb Threlkeld and Donal Synnott write “men chew it like Tobacco when dry, carrying it in their Pockets for that end, which destroys worms, and gives a Relish to Beer, as Anchoves and Olives to Wine; it is commended against Women’s longing.” Today it is being cultivated and sold as a gourmet food. In Nova Scotia it is called Sea Parsley and is sold fresh. The Irish call it “dilisk” or “dillisk” and sell it as a snack food in some pubs.

Overall, dulse has a high mineral content, with 112 different minerals and trace elements. Dulse is extremely high in iodine, a trace mineral that is converted to iodide by the human body, and stimulates the thyroid to supply hormones necessary for metabolism. Iodine helps inactivate bacteria, maintain a healthy immune system, prevent fibrocystic breast disease, and prevent miscarriages. It also encourages the development of strong nails, teeth, skin, and hair.

Dulse is also high in vitamin B6, which is essential for synthesizing protein, DNA, red blood cells, and cell membranes. It’s also important for processing protein, carbohydrates, and fats; for supporting your nervous system; for supporting hormonal balance and detoxification; for protecting your cardiovascular health; for preventing chronic inflammation, supporting cellular regeneration, and fighting disease.

One study found that dulse had potassium concentrations 34 times higher than a banana. Potassium helps regulate muscle contraction and nerve transmission; store carbohydrates for your muscles to use as fuel; maintain your body’s proper electrolyte and acid-base (pH) balance; lower blood pressure by counteracting the detrimental effects of sodium; and maintain the density and strength of your bones.

Dulse has about 29% total fiber, nearly as much as oat bran. It’s also rich in riboflavin, which helps your body produce energy, assists with normal cell function and growth, helps folate and vitamin B6 undergo the chemical changes that make them available for your body, and acts as an antioxidant, potentially helping to prevent cancer and slow cholesterol buildup by controlling the proliferation of harmful free radicals.

Dulse is a good source of the minerals magnesium, manganese, phosphorus, calcium, copper, and zinc.

You can eat fresh dulse directly off the rocks before sun-drying. Eat sun-dried dulse as is or ground to flakes or a powder. You can eat packaged dulse as a snack right out of the bag. You should carefully inspect for the small shells that sometimes cling to the algae.

You can quickly rinse dulse to tenderize it and reduce salinity before cutting to bite size. Dunk dulse fronds into a bowl of water and remove quickly. The longer you rinse it, the more minerals are lost. Wet dulse is instantly tenderized. After rinsing, the fronds are easier to cut to size for salads. For zesty sandwiches, add a layer of rinsed, tender, uncut dulse. After inspection, you can also hold 6 to 8 dry fronds in one hand, then snip them with scissors to the desired size onto a cutting board or into a bowl. Marinate chopped or snipped dulse in your favorite dressing a few minutes or longer before dressing your favorite salad.

To roast dulse, separate the pieces and spread them thinly on a cookie sheet. Preheat your oven to 200° F and leave dulse in for 3–4 minutes or until it gets brown and crisp. Watch it carefully to avoid burning. With a toaster oven, one minute on low (200° F) should be enough. Crumble it on to dips, stir-fries, casseroles, or salads for a delicious, low-sodium, salty taste. Stir-frying with dulse is easy, colorful and nutritious. Simply slice your favorite veggies of the season, sauté them in a small amount of oil with some sliced tofu and sprinkle on some chopped dulse. Dulse flakes and granules are ready to sprinkle on anything: salads, popcorn, pasta, potatoes; or mix into smoothies, tapenades, and sauces.

You can quickly pan fry dulse into chips, or simply microwave it briefly. Bake it in the oven covered with nutritional yeast, then top with salsa. You can also use dulse in soups and chowders, or add it to bread or pizza dough. Finely diced, you can use it as a flavor enhancer, in place of monosodium glutamate.