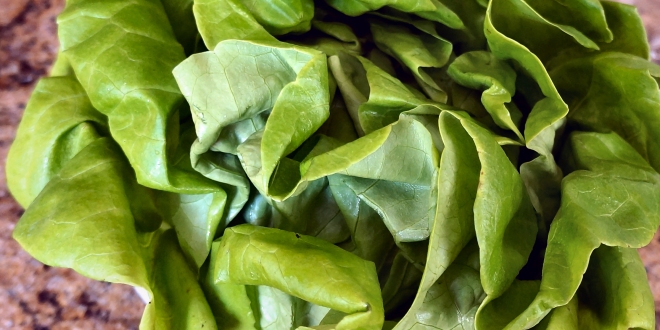 Butterhead lettuce, also known as butter lettuce, Boston lettuce, or Bibb lettuce,  is the largest and most flavorful group of lettuces. They are tender, thick-leaf lettuces that form a small head with a sweet, delicate, buttery flavor.

Cultivated lettuce is closely related to the wild lettuce, L. scariola, from which it was undoubtedly derived. Wild lettuce is now widely scattered over the globe, but it originated in inner Asia Minor, the trans-Caucasus, Iran, and Turkistan.

Lettuce was served on the tables of the Persian kings of the 6th century B.C. As in the development of the cabbages, the primitive forms of lettuce were loose, leafy, and sometimes “stemmy” types; the loose-heading and firm-heading forms occurred much later.

Lettuce was first cultivated in ancient Egypt as early as 2680 BC, and was selectively bred by the Egyptians into a plant grown for its edible leaves. Lettuce was popular among the Romans about the beginning of the first century AD, and had been brought to a fairly advanced state of culture and improvement. Around 50 AD, Roman agriculturalist Columella described several lettuce varieties – some of which may have been ancestors of today’s lettuces. Common garden lettuce was known in China in the 5th century, if not earlier.

Lettuce moved north into Western Europe. Hildegard of Bingen mentioned lettuce in her writings on medicinal herbs between 1098 and 1179.  Various new forms were described as early as the 15th century, including the butterhead, Latin, and crisphead forms. Christopher Columbus introduced varieties of lettuce to North America during his second voyage in 1493. Its culture was reported on Isabela Island (now called Crooked Island) in the Bahamas in 1494. It was common in Haiti in 1565. In 1586, Joachim Camerarius provided descriptions of the three basic modern lettuces – head lettuce, loose-leaf lettuce, and romaine or cos lettuce. Lettuce was under cultivation in Brazil before 1650. Lettuce was first planted in California, the lettuce capital of the United States, by the Spanish missionaries in the 17th century. It was among the first garden seeds sown in every European colony in North America. Between the late 16th century and the early 18th century, many varieties were developed in Europe, particularly in Holland. In Northern Europe, most people used butterhead lettuce and the Batavia form of crisphead lettuce. Books published in the mid-18th and early 19th centuries describe several varieties found in gardens today.

There are countless varieties that have been developed in the United States. Lt. John B. “Jack” Bibb served during the War of 1812, and represented Logan County in the Kentucky House of Representatives and the state Senate from 1827 to 1834. An amateur horticulturist, Bibb developed the Compositae family of butterhead lettuce in the backyard of his Grey Gables house at 411 Wapping St. in Frankfort, Kentucky in the 1850s and shared seed with friends. It was first commercially produced in 1935. Bibb is the traditional Kentucky Derby brunch salad lettuce.

Because its short life span after harvest, lettuce was originally sold relatively close to where it was grown. In the early 20th century, new packing, storage, and shipping technologies improved the lifespan and transportability of lettuce and resulted in a significant increase in availability. During the 1950s, lettuce production was revolutionized with the development of vacuum cooling, which allowed field cooling and packing of lettuce, replacing the previously used method of ice-cooling in packing houses outside the fields.

Lettuce is very easy to grow, and has been a significant source of sales for many seed companies. Tracing the history of many varieties is complicated by the practice of many companies, particularly in the US, of changing a variety’s name from year to year. This was done for several reasons, the most prominent being to boost sales by promoting a “new” variety or to prevent customers from knowing that the variety had been developed by a competing seed company. Documentation from the late 19th century shows between 65 and 140 distinct varieties of lettuce, depending on the amount of variation allowed between types – a distinct difference from the 1,100 named lettuce varieties on the market at the time. Names also often changed significantly from country to country.

Butterhead lettuce is one of the very low-calorie green vegetables: 100 grams of fresh greens provide just 13 calories, but they contain many phytochemicals that have health-promoting and disease-prevention properties. Just 100 grams of fresh, raw butterhead lettuce provides 128% of daily vitamin K.  Butterhead lettuce is a rich source of vitamin A, and  provides 1987 µg of beta-carotene. These compounds have antioxidant properties. Fresh butterhead lettuce contains good amounts folate and vitamin C. Zea-xanthin (1223 µg per 100 g), an important carotenoid in lettuce, is selectively absorbed into your retinal macula lutea, where it provides antioxidant protection and filters UV rays falling on your retina. Diets rich in xanthin and carotenes are thought to offer some protection against age-related macular degeneration (ARMD). Lettuce also contains good amounts of minerals like manganese,  iron, potassium, calcium, phosphorus, magnesium, zinc, and copper,  which are essential for metabolism. Lettuce is rich in the B-complex group of vitamins including vitamin B6, riboflavin, thiamine, pantothenic acid, and niacin. It’s low in sodium, very low in fat, and has zero cholesterol.

Good-quality butterhead lettuce will have fairly large, loose heads with thick leaves and even green coloring.  Scratch the stalk and smell: a sweet smell indicates a sweet flavor, while a bitter smell means bitter flavor. Look for green leaves without any damage or sliminess and a nice cluster of leaves in the center. Avoid heads with thin, wilted leaves and brown spots near the stalk end. Extremely solid, light-colored heads mean all core and less taste.

Butterhead lettuce doesn’t keep for very long, especially if there is any damage to the leaves. It is best kept in a dry, open bag with the head facing upwards. It can be kept in your refrigerator for up to five days. The “living” varieties should be stored in its original container and rinsed well immediately before using.

Because this lettuce is relatively round and flat it is best to remove the core using a corer or a knife. To do this, remove any roots from the bottom of the lettuce, and tip the lettuce head upside down. Place the corer in the middle of the lettuce and push down. All the outside leaves should separate from the core.

Rinse leaves under a tap and pat or spin dry. When using leaves in a salad, make sure the leaves are dry or the dressing will roll of and sit at the bottom of the bowl.

This type of lettuce is best used in salads. The baby-sized varieties are usually the right size without the need to cut them. Try mixing different types of salad leaves such as red corral leaves together with the butterhead to add different textures to the salad. A light balsamic vinegar dressing works well with butterhead lettuce.