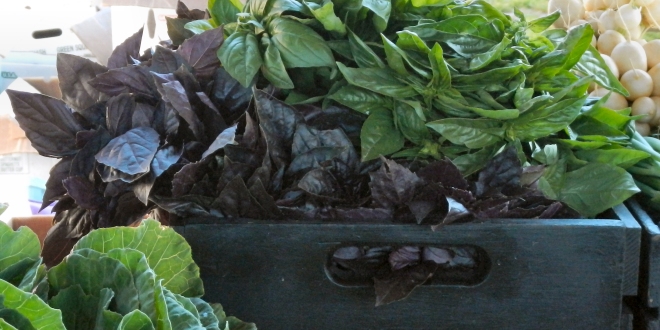 The genus Ocimum is most diverse in Africa, so that is probably where basil first appeared. It eventually spread to India  over 5,000 years ago, where it was probably first cultivated, and where the plant was considered a sacred herb and a powerful protector. It was often planted around temples and laid with the dead. From there (according to Tom Stobart in his 1977 book Herbs, Spices, and Flavourings) it made its way to the Middle East. It migrated westward as whole plants, since it could be grown easily indoors away from frost exposure. Basil’s written history begins 4,000 years ago in Egypt, where accounts indicate that it was grown and used as an embalming and preserving herb.

Perhaps because of its embalming use, basil was also a symbol of mourning in Greece. The word basil comes from the Greek basileus, “king,” possibly because the herb was once used by ancient royalty. In ancient Greece, it was known as basilikon phuton, meaning royal herb.  The ancient Greek writer Dioskurides knew sweet basil as okimon (“fragrant [plant]“), from which botanists derive the the Latin genus name Ocimum.

Theophrastus, around 300 BC, mentions basil in his Enquiry Into Plants. According to the Roman writer Pliny, the ancient Romans believed that the more basil is cursed when you are planting it, the better its seeds will sprout and the seedlings prosper. This is likely the origin of the French phrase semer le basilic [sow the basil] meaning “to rant” or “to slander.”

Sweet basil was grown in the Hunan region of China in 907 AD.

Because basil does not grow well in the presence of rue, and because rue was thought to be “an enemy to poisons,” some medieval European physicians thought basil was poisonous. Scorpions often sought to rest under basil pots, and somehow people began to believe that a sprig of basil left on its own underneath a pot would eventually turn into a scorpion, according to the 1971 book,  A Modern Herbal: I – Z, Volume 2, by Maude Grieve. Some medieval doctors took this superstition so far as to caution that smelling basil would breed scorpions in the brain. Perhaps because of these superstitions, basil was considered an emblem of the devil in Crete and was placed on most window ledges as a charm against his influence, according to Thomas Firminger Thiselton-Dyer in his 1889 book, The Folk-lore of Plants.

As with many other areas of science, Arabs continued to move forward while much of Europe remained mired in superstion. Ibn al-Awwam was an Arab agriculturist who flourished at Seville in Spain about the end of the 12th century. He wrote a treatise on agriculture in Arabic called Kitab al-Filaha (Book on Agriculture). He mentions many kinds of basil with instructions for growing them. Ibn al-Bayṭār, was a Muslim scientist, botanist, pharmacist, and physician born in the Andalusian city of Málaga at the end of the 12th century, whose main contribution was to systematically record the discoveries made by Islamic physicians in the Middle Ages, which added between 300 and 400 types of medicine to the one thousand previously known since antiquity. He mentions several types of basil used in medicine.

As with many other delicious vegetables and herbs, sweet basil was reportedly introduced to French cooking by Catherine de Medici when she married the French King Henri II in 1533, and later in the century it arrived in Britain, probably from France. Sir Francis Bacon, credited with creating the scientific method, wrote in his 1622 work, Historia Naturalis, “It is strange which is reported that basil too much exposed to the sun doth turn into wild thyme.”

Seventeenth-century herbalists began to recommend basil. Nicholas Culpeper touted basil as a remedy for scorpion stings, and John Parkinson recommended sweet basil as an antidepressant “to procure a cheerfull and merry hearte” (Paradisus in Sole, Paradisus Terrestris, 1629). French cooks in the court of Louis XIV recommended the herb for use in soups, ragouts, and as the basis for the addictive garlic herb sauce pistou, known in southern Italy as pesto. In Victorian times, it was sent for best wishes in nosegays. In Italy, basil is considered a sign of love. When a woman puts out a pot of basil, it means she is ready to receive her suitor. In France, it is called herbe royale. In Romania, tradition connects basil with blessings, love, and marriage. In India, holy basil is also known as Tulsi, and in Hinduism, it is the reincarnation of Lakshmi, the wife of the god Vishnu. Lakshmi brings wealth, luck, happiness, and blessings to weddings  According to Maud Grieve, “Every good Hindu goes to his rest with a Basil leaf on his breast. This is his passport to Paradise.” Basil is often considered a love token and is planted on graves in Iran, Malaysia, and Egypt.

Basil reached North America in the seventeenth century. It was offered for sale in the Virginia Gazette in 1775, and it was listed in John Bartram’s 1783 broadside Catalogue of American Trees, Shrubs and Herbacious Plants . By 1806, according to Bernard M’Mahon, plant procurer for Thomas Jefferson, the herb was already well-known in the young United States. In Mexico, it’s supposed to keep a lover’s eyes off others. It is considered a powerful protector in Haiti.

During the 19th century, basil fell out of fashion in English-speaking countries outside of Italian and other immigrant communities. For many years most home gardeners in North America and Britain considered basil an exotic. In 1912 British herb enthusiast Lady Rosalind Northcote extolled basil’s virtues, lamenting, “Basil is too much neglected nowadays” (The Book of Herbs). According to Stobart, as late as 1970, the British Ministry of Agriculture assessed sweet basil as being “now of little or no importance…In English and American markets basil as a fresh herb is nowadays very uncommon.”  The cultural revolutions of the 1960s and 1970s popularized “foreign” Mediterranean and Asian cooking, and today, basil has had a resurgence. Among North American consumers of fresh herbs, sweet basil ranks number one in popularity.

Whenever possible, choose fresh, organic basil over dried, because it is superior in flavor. The leaves of fresh basil should look vibrant and be deep green or purple in color. They should be free from dark spots or yellowing. When purchasing dried basil, try to select organically grown basil, because this will give you more assurance that it has not been irradiated. Among other potential adverse effects, irradiating basil may lead to a significant decrease in its vitamin C and carotenoid content.

Store fresh basil in the refrigerator wrapped in a slightly damp towel. You can also freeze it, either whole or chopped, in airtight containers or in ice cube trays covered with either water or vegetable broth. You can then add a cube or two to soups, stews, or dressings. Dried basil should be kept in a tightly sealed glass container in a cool, dark, dry place where it will keep fresh for about six months.

Because the oils in basil are highly volatile, it is best to add it near the end of the cooking process, so it will retain its maximum flavor.

22 thoughts on “Basking in the Glory of Basil”